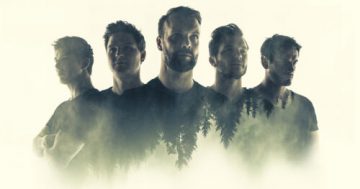 An artist’s anniversary can conjure both excitement and surprise amongst their fans: the joy of retrospection or the disbelief that a new discovery has been honing their craft for so long. As Leprous announce their 20th anniversary tour, this observation rings as true as it ever could.

The term ‚progressive‘ in music is a broad brushstroke referring at once to a decades-old movement but also an approach; whilst many listeners yearn to hear a ‚classic‘ sound in the vein of Pink Floyd, there is an argument that the likes of Radiohead are truly making progressive music in the modern day. It is that approach – a nod to how the originators were exploring rather than copying their moves – that sets Leprous in their mould whilst simultaneously breaking out of it.

by not releasing their debut album ‚Tall Poppy Syndrome‘ until 8 years later. The pursuit of perfection perhaps, but once they were in their groove, the band didn’t stop: a series of ever-evolving albums landed every couple of years until 2019’s ‚Pitfalls‘.

What is interesting about the evolution is that it has truly been just that – a band who have been described as progressive, metal, avant-garde and everything in between over the years, now standing tall as one of the most intelligent and creative rock bands around. They never stand still, controlling the tide, but remain undeniably a unique force.

The Leprous of today – completed by Baard Kolstad, Robin Ognedal and Simen Borven – may have been discovered as a rock band with as much in common with the likes of Biffy Clyro as any other artist. Those new fans will be taken on a journey along with those who first heard Leprous in the metallic early years with this 20th anniversary tour. Billed as ‚From the Beginning‘, it will be a chronological show from the early demos to their most recent album, and a thrilling example of how music can truly progress.