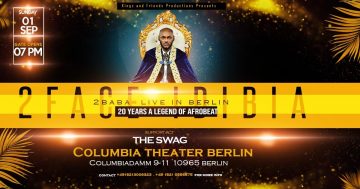 For the first time in his career the king of afrobeat 2Face aka 2Baba is coming to Berlin to play for y’all. Not only is he consistently ranked as one the best African musicians of all-time but his track record over the last 15 years deservedly earned him the description of an Nigerian Music legend.

He started out as a member of the defunct Plantashun Boyz. The group rose to popularity on the strength of their incredible vocal talents and harmonies, winning over a whole generation of young Nigerian fans. After the group disbanded, 2Face continued his solo musical career on the Kennis Music label. His solo album „Mfana Ibagha“ was a huge commercial success and launched him into International consciousness, with a nomination for the Kora Awards ensuing within months of the release of this debut.

He went on to release several hit albums and win a several awards, including the MTV, MOBOS, Kora, Headies, City People, Nigeria Music Awards – just to name a few.

He has collaborated with numerous acts including Wyclef Jean, Beanie Man and many more.