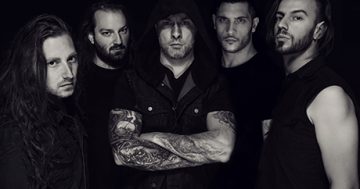 Ok you dirty ghouls and terror maniacs! The time has come, we’ve all had enough time sitting at home, eating thousands of pizzas and gaining tremendous amounts of weight… and well, eventually, we wrote an album! So here is some good news to make your 2021 hopefully slightly less of a giant smelly turd than 2020:

1- We will be entering the studio, for said album, the writing is done and we are beyond stoked about it. More on that later.

2- HELL OVER EUROPE TIME! That’s right!! Your favorite and most infamous extreme metal tour returns (or well, at least we hope it’s either of those).

Added to the mix to spice up your life are: The Acacia Strain (they hate stuff maybe as much as we do, so we are looking forward to bitch like a bunch of old farts on a daily basis). The Acacia Strain comments:
“we are thrilled to come back to Europe. We’ve been sidelined since March of 2020 (because nobody in America can follow the god damn rules) and its great to be able to get back to doing what we love. Come out to a show and see if we remember how to play our stupid songs!”
Once again, we team up with our brothers from (possibly) other mothers Benighted (No promises if Julien will wear footwear, good thing we all have masks, right?). Stefano clearly has some fat to burn, so we figured he should play twice a night and thus our good friends Hideous Divinity have been added as well for a good dose of Mario blasts! For the first time we will be taking a Belgian band along, so say hello to Fleddy Melculy, a great live act and a bunch of rad dudes (don’t worry, we promise their live shows are much better than their band name picking skills). And last but not least, a band that has taken the world by storm with a pretty rad album: Cult of Lilith (prepare your anus).