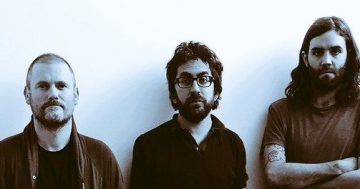 Following the recent announcement of the release of BEAK>’s soundtrack to Tom Geens’ debut feature film ‘Couple In A Hole’, the band reveal a previously unheard track taken from the OST. Geoff Barrow of the band says of the collaboration: “It was a total pleasure to work with Tom on his film and it’s also been great to have so many people support a film that is as unusual and uncompromising as this”.

The film is set for general release on April 8, 2016 with the soundtrack to follow shortly after. “Couple In A Hole” was written and directed by Tom Geens and stars Kate Dickie (Game of Thrones, Prometheus, Red Road) and Paul Higgins (In the Loop, Utopia) as a couple who, after suffering a tragedy, begin living in solitude in a cave in the woods.

Premiered at the Toronto International Film Festival last month, the film saw inclusion in both the Guardian and Hollywood Reporters festival highlights. The Guardian went on to reward the film a 4* review describing it as a “poignant and freshly told film about the devastating power of isolation.” The film also won the main three awards (including the Golden Hitchcock for Best Film) at the 26th Dinard British Film Festival.

BEAK> feature Billy Fuller & Geoff Barrow who are both based in Bristol, UK and are signed to Invada Records. They have released two full length albums and several EP’s / Singles.