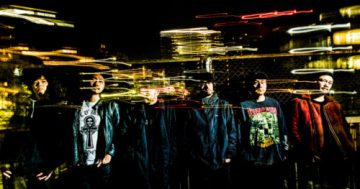 In 1995, the three original members Manabu Nakagawa(Ba), Nobukata Kawai(Gu), Tetsuya Fukagawa(Vo,Key) formed envy after the breakup of their previous band.

envy has continuously played at festivals such as HELLFEST、FUJI ROCK FESTIVAL、All tomorrow’s Party and played with various bands such as Explosions in the sky、CONVERGE、DEAFHEAVEN,MOGWAI,ISIS etc.

The band enters a stagnation period after some members leaving the band after December 2015, but once Tetsuya Fukagawa came back after 2 years, the band restarts with 3 new support memebers, y0shi (Gu), Yoshimitsu Taki (Gu)、Hiroki Watanabe (Dr) and now is 6 member band. The band has released „The Fallen Crimson“ with their new line up in February, 2020 and they will be releasing a live album in November, 2020 which was performed at Tokyo Liquidroom.