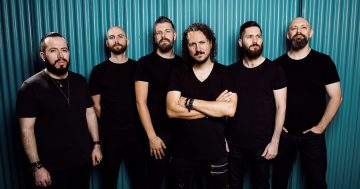 In the contemporary era of progressive music, there are few bands who can claim to be as innovative, creative and restively dynamic as Haken. Since their inception in 2007, they’ve shown over four previous studio albums, one EP and a live release that they never stand still, merely satisfied to rely on past triumphs. Rather, Haken always look for ways to challenge themselves as musicians and artists, and also to keep the listeners on their collective toes.

“We don’t like to make simple music,” laughs vocalist Ross Jennings. “We always aim to defy expectations, and I believe we’ve surpassed what we aimed to achieve with our new album.”

Their fifth studio record sees the band going in a heavier direction with the music. “We’ve always had a heavy influence”, explains guitarist Charlie Griffiths, “but it was obvious from the riffs that were naturally coming out of us early in the writing process that this would be a more metal album. These are some of the most riff driven songs we’ve ever written.”

“This is something we have been thinking about doing for a while now,” adds keyboard player Diego Tejeida. “We had a couple of heavier tracks on our last album, ‚Affinity‘ (2016). And they went down really well. At the end of last year, once we had finished touring, we all felt it was time to go in that direction and embrace a heavier stance.”

Jennings gives praise to his bandmates for the way the music on the new album was developed. “It’s always a huge puzzle at the beginning. Charlie (Guitars) seems to have an endless library of original riffs up his sleeve ready to be developed. Bassist, Conner and Rich (Guitars) started writing initial ideas in hotel rooms while we were on the road performing with Mike Portnoy’s Shattered Fortress, and Diego came up with 2 fantastic compositions which we all got really excited about and developed.
“Once we had the musical style worked out, it made it a lot easier for us to write the songs,” says Tejeida. “We were all focused on where this album should take us, and had a unified sense of direction. And, as has been the case since ‚Affinity‘, all of us contributed to the writing side of things.”

But if this album, titled ‚Vector‘, is musically heavy, then there’s an underlying theme running through the seven songs which is certainly esoteric and fascinating.
“The scene is set with the track The Good Doctor, which was a really fun song. Musically it feels like a logical step from ‚Affinity‘, but lyrically it’s a bit more theatrical and about as ‘rock opera’ as Haken has ever got”, explains Griffiths. It’s about a Doctor with an intriguing, perhaps sinister interest in a particular patient. From there the story enters the point-of-view of the patient – who appears to be catatonic, but his mind is sparking with what could be memories, or delusions brought on by the treatment he’s receiving – we leave this up to the listeners to decide. Although we don’t want to give too much away, listeners who are familiar with our back catalogue will have fun discovering further clues we’ve planted throughout the album”.

Griffiths also sheds some light on the significance of the album’s title. “There were various meanings of the word ‚Vector‘ that seemed to fit the type of album we wanted to make, as well as the letters

themselves having a nice connection, which might make more sense in the future. I’d say the biological meaning is the one most relevant to the story arc of the album.”
Jennings continues to offer some added insight to the lyrical concept. “We’ve drawn inspiration from various sources. Cinematically we talked about One Flew Over the Cuckoo’s Nest, The Shining, Bronson and A Clockwork Orange for that dark and slightly surreal, dreamlike tone. Also the early to mid-20th century psychological studies carried out by the likes of Stanley Milgram, B.F. Skinner and of course Hermann Rorschach were a big part of it.”

Tejeida reveals that he has long had an abiding passion for Psychoanalysis. “If I hadn’t become a musician, then there’s every chance that I would have become a Psychoanalyst. I have been interested for a long time in the whole concept of the human mind. The way in which the unconscious can be brought into the conscious. I did draw on my own experiences while undergoing psychoanalysis for the lyrics which I wrote, although, as is always the case with us, this is mixed with fiction. And the line between reality and fantasy is deliberately blurred.

“I have personally found being in analysis to be very beneficial. It’s a big taboo for some people, and I have been asked why I do it. But I love what it has done for me. It’s a voyage of discovery, which is so revealing.”
As Tejeida suggests, the band have used such devices to bring to the fore their own life experiences, although you will have to dig deep to discover exactly what these might be. However, that has always been the Haken method: offer clues, but leave people to solve these for themselves.

They began the recording process in late May this year, and had this aspect of making the album finished by the end of June.
“The drums were tracked in London,” says Jennings. “But these days we are something of a transatlantic band. Diego lives in Mexico (close to Mexico City) and Conner is in Indiana, so a lot of the process was done through exchanging music files over the internet. The vocals were done at Diego’s home studio, which was perfect for what we needed and provided a relaxed environment for me to focus on the performance”

All the musical adventures and notions were coalesced by Adam ‚Nolly‘ Getgood. Formerly bassist with Periphery, in the last couple of years he has built a reputation as a fine producer.
“We produced the album ourselves, as we always do,” insists Jennings. “But we’re fans of what Adam has done with Periphery, Sikth and Devin Townsend. He has a great reputation for the heavier end of our genre”.

“We contacted Adam and asked him to work with us very early in the album process,” explains Tejeida. “It was even before we had done demos for the songs.
“I’d known Adam for a few years and I’ve wanted to work with him for a long time” adds Griffiths. “It became obvious to me that his expertise would be perfect for the music we were writing. With him being UK based we were really able to dig into the drum and guitar tones to a level we haven’t been able to before; he was very hands on in that respect and was very much interested in realising the sounds we had in mind, it was a lot of fun.”

The Rorschach inspired album cover again fits in to the whole psychological theme. “I approached our long-time collaborators Blacklake Design about creating an ink-blot album cover”, explains Griffiths “I felt that it was important that it was created randomly and not be designed. Within a few hours Mark had sent back around 20 that he’d made using real ink and paper. We picked the one you see, that seemed to have the right attitude for the music.”

“The great thing about having this as a cover is you might think you know what it’s supposed to be, but it’s not necessarily true for the way others see it,” says Tejeida. “It’s all in your own mind.”

And this is far from being a self-contained concept. The band have deliberately left it rather open ended. “This might be a starting point for something in the future,” reveals Tejeida enigmatically. “Who knows?” “The way it’s been set up, we can always return to this theme in the future,” concludes Jennings. “But what we have done here is leave it to others to decide for themselves where it’s all going, and how it ends. That’s what Haken have always been about. By taking this approach, we ensure that what we do means different things to different people. And that’s the challenge for the fans – to find out for themselves their own meaning for ‚Vector‘ as an album.”