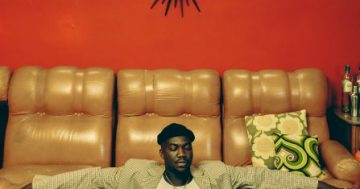 Like all trailblazers, Jacob Banks defies any and all boundaries. His ear-catching signature sound remains equally steeped in the swing of R&B, the grit of rock ‘n’ roll, the gusto of hip-hop, and the power of pop. “I don’t just play one genre or stand for one sound. I’m a macrocosm of many things and experiences, and I want to share all of these with people” says Jacob.

New album ‘Lies About The War’ is due to be independently released later this year via Jacob’s own label ‘Nobody Records’. Discussing lead single ‘Just When I Thought’, released in March 2022, Jacob said,“with everything happening in the world over the last 2 years or so, I consistently found myself in a space that I felt powerless. Feeling this level of powerlessness was a new feeling but in a way I found a new type of power is the understanding that what’s for me will always be for me if I stay ready. It’s a story of two parts, my rebellion to the feeling and my surrender to the feeling”.

On his 2021 EP For My Friends (Interscope/Polydor Records) – more than ever – Banks wanted to keep people company. Returning from the road as society went into lockdown in the top of 2020, he sequestered himself at his place in London and created and recorded at home under the watchful eye of his two cats, working with longtime collaborator Sillkey through the wire as well as Jonah Christian in Los Angeles and Dani Young in Australia. The EP received widespread acclaim from the likes of CLASH, Notion, The Line of Best Fit and Trench with individual singles tackling various themes. Lead single ‘Parade’ was inspired by the unrest Banks felt upon attending a Black Lives Matter protest and dropped with an epic music video starring Kojey Radical.

Introducing a boundless approach, Jacob’s debut album, The Village was released in two parts – Chapters 1 and 2 – in order to allow listeners time to live with each song, emotion, and movement. Thematically, they represent different sides of a dynamic whole. Chapter 1 celebrates his childhood in Africa, while Chapter 2 focuses on his life in the UK and America.

Jacob explains, “Every time I write, I give so much of my soul and life away. I wanted to slow it down and give fans a chance to actually live with the music. Even if the first half is out, I can be in the studio and keep pushing myself on the second. The first chapter is the African side. The second chapter is the Western side. It represents my life.”

Born in Nigeria, he moved to Birmingham, UK at 13 where he embraced music. In order to impress his mates, Jacob would write and perform songs. In turn, they encouraged him to record. “I was happy to sing in my bathroom alone in Coventry,” he admits. “I didn’t want to be an artist, but my friends kept pushing me. The first couple of times I went to the studio were because my friends wanted my songs on CD, so they could listen to them in the car! That’s the only reason I initially started recording music.”

However, it was John Mayer’s “Slow Dancing in a Burning Room” that encouraged him to take the next step and go deeper. The song’s bluesy crawl illuminated a level of self-expression Jacob yearned to achieve. “I was craving an outlet to express myself,” he recalls. “John Mayer could express himself. I wanted the same freedom he had.”

In between attending Coventry University, Jacob hit the open mic circuit. He cut his teeth at countless impromptu gigs, and the apathetic nature of these shows would deeply inform and inspire his intense and invigorating performance style. “It taught me how to earn a crowd’s attention,” he admits. “When you’re performing at an open mic, people don’t give a shit. If they can have a laugh at your expense, they will. So, you have to catch their attention quickly. That’s what I learned. I don’t get nervous on stage because those were the hardest performances. I also found out, ‘Less is more.’ The simpler the song, the more audiences were into it. If I told the truth, they would fuck with it.”

Jacob released two independent EPs prior to The Village —The Monologue and The Paradox— and made his debut on Interscope/Polydor with The Boy Who Cried Freedom EP.  Track “Unknown (To You)” has been streamed over 45 million times on Spotify alone, and his music has been raved about by everyone from The FADER to Vogue, with Time recognizing “Chainsmoking” as one of the “Best Songs of 2017 So Far.”

A far cry from the open mic circuit he hit during his university years, Jacob has played major venues across the UK supporting the likes of Alicia Keys, Sam Smith, and Emeli Sandé on tour. “By touring with them, I learned how to pace a show,” he remarks. “If I’m singing my ass off, I now conserve my energy on the next song. It’s strategic. It’s like doing a marathon. I do that because of those tours.” Jacob has collaborated on songs with the likes of Grace Carter, Seinabo Sey and Ghetts.

His presence has captivated audiences at numerous festivals. The New York Times named him among “12 Notable Acts at SXSW,” and he’s graced the stages of Coachella, Lollapalooza, Austin City Limits, Latitude, The Meadows, and more. Jacob has also delivered standout sets on television shows such as Jimmy Kimmel LIVE!, The Ellen DeGeneres Show and Later… with Jools Holland. Not to mention, he landed music in The Equalizer 2, Lucifer, Suits, and Game of Thrones, to name a few.