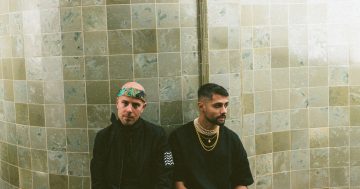 Karpe (Chirag Rashmikant Patel and Magdi Ytreeide Abdelmaguid) are now by far the biggest rap artists, if not the biggest band, in Norway. After a decade at the forefront of the Norwegian music scene, they continue to break barriers with every move they make – their latest project Heisann Montebello (2017), being the most groundbreaking one yet.

Each song, nine in total, was released with its own music video. The musical and visual universe created debate and controversy, and revolutionized the way music is launched and consumed. After three sold out shows in one of Norway’s largest venues, Oslo Spektrum, they went on releasing a movie based on the universe they had created. The movie, Adjø Montebello, was the grand finale and was shown in theatres all over Norway four days in December 2017.

2019 marks the beginning of something completely different.