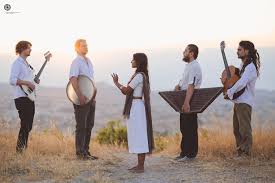 Light in Babylon makes original Oriental Mediterranean music. Based in Istanbul, the band combines several ethnic groups and cultures.The Iranian – Israeli charismatic singer and songwriter, Michal Elia Kamal accompanied by Turkish and French
musicians, and together they are the new fresh voice coming out now from Istanbul.
Light in Babylon offers a concert which is not only music, but a musical journey with the audience through the middle east, Istanbul and the Balkans. With oriental instruments and a powerful voice of the main Singer, the band tells a story, and sends a message of humanity, multiculturalism and women empowerment.
In these days, where too many women around the world live in a system of gender apartheid, like in Iran for example where women are not allowed to sing in public, the singer Michal Elia, tells  the story of her family who fled from Iran after the revolution and her dream to sing in Iran one day. The video clip of the song “ The women of Teheran“ by Light in Babylon written by Michal Elia reached millions of views around the world.
You can be sure that you never had this kind of concert and that the audience will continue talking about it for a very long time !
Light in Babylon had their first big success all over Turkey, with sold out concerts in well known venues around Turkey ( IF
Performance Hall- Istanbul, Cim Amphitheater- Izmir, Ankara Palas- Ankara and more..) and they appeared on
Turkish TV regularly,
In Europe as well, they have a very big and growing fan base, they played in well known festivals around Europe such
as: „Stimmen Festival“ (Germany), „Fusion Festival“ (Germany), „Ancient Trance Festival“ (Germany), „Micro
Festival“ (Germany) „Heimathafen Neukolln“ – Sold out concert (Berlin, Germany), „Nuits du Sud“ (France),
„Balkanik Festival“ (Romania), „Bridge Festival“ (Greece), „Xera Festival“ (Spain), „Nuit du Sud Festival“ (France)
and many more.
Last summer in July 2022 they had two concerts in Rudolstadt Festivalin Germany and were marked as the best act and promising band of that year.
They were programmed in the ARTE Tv program „Au diapason de la Ville/ Pflasterklange“ (that was also selected and
screened in Womex 14), they have been covered by EuroNews in 12 different countries and they also spoke and
played in TEDx .
Their YouTube videos reached over 30 million views and their fan base is growing up every day.
Press Reviews:
Europalia :
“ Istanbul based ethno folk ensemble Light In Babylon are one of the last years freshest musical exports of Turkey.
The stunning voice of the singer Kamal combined with the beautiful sound of the santur and the western guitar-
playing result in a mind-blowing experience. „fRoots Magazine:
“ A celebration of the cosmopolitan traditions of both Istanbul and the Sephardic Jewish community and another
example of the great music that is coming out of the Eastern Mediterranean right now“
Songlines Magazine:
„Light in Babylon comes out loud and clear,across time and space. No fake Orientalism or Chilled-out lounge sounds
are to heard from this strong band, which today represent some of the best music coming out of the east of the
Mediterranean..“
* Full band concert (5 musicians) , includes: vocal, guitar, santur+sansula, bass guitar, oriental percussion set .
(We recommend it for big events/festivals)
Examples you can see in those videos:
https://www.youtube.com/watch?v=Lj4_0fLrJbs&ab_channel=LightinBabylon (summer 2022)
https://www.youtube.com/watch?v=1fuKm9MpC2Y
https://www.youtube.com/watch?v=fiWCbNea5_A
https://www.youtube.com/watch?v=BfPWLK-75CU
https://www.youtube.com/watch?v=2hHfAan74ekfiWCbNea5_A
https://www.youtube.com/watch?v=SIyDCyiN3v0
Close