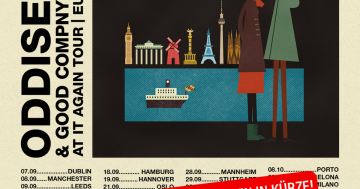 Verschoben / Rescheduled: Dear Europe, it is with a heavy heart that we have to announce the postponement of the upcoming September and October tour. Except for Hannover (DE) and Milan (IT), which will be canceled, all dates will be rescheduled. Tickets for Hannover (DE) and Milan (IT) will be refunded at the point of purchase. All other tickets remain valid for the postponed dates. We’re working on the new dates at full swing and doing our very best to share them with you as soon as possible. We sincerely apologize for any inconvenience and hope to see you all soon!

Örtlicher Veranstalter
„Its been over two years since Good Compny band & I have been on a tour. Come to think of it, I haven’t left the North East Coast of America or boarded a plane in over two years either. That’s a major difference from being on the road for up to six months at a time for over a decade.
Spending so much time in one place has had its up’s and downs. My family has grown as well as our connection. At times I felt more distant from myself. It left room to search for an inspiration from within to create. Not having the option to travel, I’ve relearned how to create from my heart & imagination. Using this time off the road, I’ve started a label, produced written & recorded new material. I’m truly excited to finally be releasing these new works & performing them live. It feels good to be back at it again!„
Close