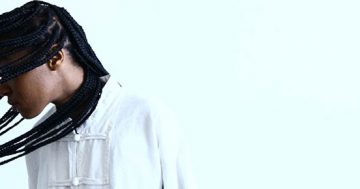 Welcome to an amazing evening with the finest of Poetry & Hip Hop from Berlin, London and South Africa!
POETRY MEETS Hip Hop is a creative space for local and international artists who happen to identify themselves in the framework of Hip Hop.
Inspire and get inspired by Spoken Word Artists and Hip Hop Heads, Instrumentalists and Beatboxers in spaces of Togetherness, Empowerment and Support.

Headliner: Yugen Blakrok (MC x ZA)
Her lyrics are mosaics of social commentary infused with layers of mysticism and consciousness, layered over beautifully dark and lush boom bap backdrops. Yugen’s genre is almost post-apocalyptic
and afro-futuristic in nature with a dark sombre mood created by her tone and subject matter. As a solo artist, she has shared the stage with some of the most well-known artists in the
country as well as performed alongside renowned international acts such as Public Enemy, Copywrite, Soweto Kinch, Jonzi D and Onyx.
Her debut album “Return of the Astro-Goth”, independently released through Iapetus Records in October 2013, was hailed a classic in numerous international and local reviews and has received
several award nominations as well as considerable international airplay, notably by Chuck D himself on the PEPR radio show.

Rebaone Mangope (Vocals x ZA)
A South African woman trying to make sense of her identity in a Eurocentric world. Her message: „Africa’s greatest currency is its culture and I assume the responsibility of sharing it within foreign contexts. Ever grateful for the gift of expression. Mayibuye iAfrika!“

Goitsy (Poetry x ZA)
Goitsy is a storyteller who uses oral-tradition as a channel for her passion in activism, intersecting narratives and performance art. There are many experiences that intertwine to form the journey of the human soul. Story-telling and performance art gives a voice to unknown narratives and helps us all connect and understand each other better.
Her poetry is inspired by tales of daughterhood, motherhood and the many shades that can form such alliances. Narratives of the black female experience, combined with story-telling and the urge to give the next generation a better experience

Otis Mensah (Musician & Poet x London)
The 1000 Monkeys (Spoken Word/Poetry Group) described him as a „a young story-teller-rapper-poet with a mesmerising delivery and a talent for drawing the poetic from the everyday happenings in his life.” The alternative hip-hop artist has risen from a new wave; age and era which embraces a contemporary take on a nostalgic authenticity in hip-hop music. The music he creates often captures a mellow vibe but a good-willed atmosphere with wordplay and lyricism that is nothing less than “ironic, honest and humorous.” It’s not unusual to hear Otis’s lyrics accompanied by a boom-bap sounding hip-hop instrumental with a jazzy or soulful feel drawing from influences such as Mos Def, Common & The Roots.

OPEN STAGE PRE-SELECTION!
Poet-heads, Hip Hop-heads, singers, emcees, beatboxers and also instrumentalists apply for a spot at the open stage! Send an E-mail with your artist name and artwork (be it poetry, vocals or beatbox) to info.pmhh@gmail.com until the 12th April.
Only a few will be chosen!

Can’t wait? Join us and enjoy a nice evening with funny, political and poetic consonances of words.