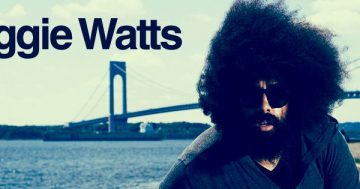 Hilarious, brilliant, unpredictable – comedian/musician Reggie Watts is a staple of the international performance scene. Reggie’s improvised musical sets are created on-the-spot using only his formidable voice and a looping machine. No two songs are ever the same. An avowed „disinformationist,“ Reggie loves to disorientate his audiences in the most entertaining way. You may not know what Reggie is going to do, but that’s okay – he doesn’t either.