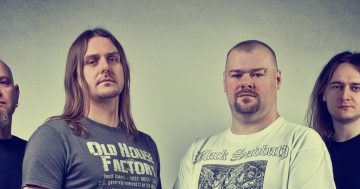 Poland’s Progressive Rock shooting stars RIVERSIDE have undergone a highly interesting and purposeful progression throughout their musical career so far.

Commencing with densely atmospheric and partly dark Metal soundscapes on their early steps back in 2001, this quartet effortlessly struck a nerve with the changing prospects of the new Prog Metal generation that embraced acts like Tool, Porcupine Tree or Opeth for their instrumentally technical, yet deeply emotional and still always powerful, fresh take on the style. RIVERSIDE quickly morphed into one of the leading acts within the new European Prog Metal movement with the release of their “Reality Dream” trilogy, which encompasses the band’s much acclaimed first three releases, “Out Of Myself” (2003), “Second Life Syndrome” (2005) and most remarkably “Rapid Eye Movement” (2007).

Having toured in support of scene-icons Dream Theater as well as playing several headlining runs all across Europe finally fully established RIVERSIDE both in the Metal and the Prog-Rock realms and their latest album release, “Anno Domini High Definition“, entered the sales charts in Poland at # 1 (Gold album status by now!), Germany at # 94 and The Netherlands on # 58 upon its release in 2009 to solidify the band’s ever-blooming momentum within their growing fanbase. In 2011, RIVERSIDE followed up by releasing a special EP entitled “Memories In My Head” in order to celebrate the band’s 10th anniversary of existence and once again toured restlessly all across the world, with one of many highlights being their appearance on the main stage of Poland’s gigantic Woodstock festival in July of 2011, a spectacular event attended by more than half a million (!) people.

In 2015 a new chapter will start. The new album Love, Fear and the Time Machine will be released at the beginning of September on InsideOut/Century Media. During the summer the band will play festivals and headline shows, followed by a big tour in the autumn in the South and North America and Europe.