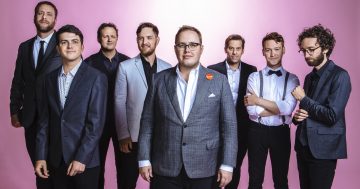 Sea of Noise, the second full-length album by St. Paul and the Broken Bones, marks a quantum leap in sound and style for the high-voltage Birmingham, Alabama-based band.

The collection of new original songs is the group’s first release on RECORDS, a joint venture of SONGS Publishing, winner of ASCAP’s 2016 independent publisher of the year award, and veteran label executive Barry Weiss.

Sea of Noise is a successor to the Broken Bones’ 2013 debut album Half the City, which introduced the group’s blazing mating of ‘60s soul fire – daubed with latter-day influences like Sly Stone, David Bowie, and Prince — to Janeway’s impassioned singing and writing. The new album witnesses a deepening and broadening of the unit’s musical reach and lyrical concerns.

“It felt like it happened organically,” Janeway says of the band’s development. “With the last record, it was like doing things with your hair on fire – going in, recording it live. There’s a sense of urgency to having a record like that. We were only a band for about five months at that point. I didn’t know my voice – I’d never done this professionally. I was just learning more nuance, and about carrying a melody. You don’t have to go for it 100% all the time. You can draw people in by giving and taking.”

Janeway says that he and his close musical associate Phillips began to ponder the direction of the band’s second album a year and a half ago. “If we had been forced to go into a studio a year and a half ago, we probably would have done a better version of Half the City,” he says. “There would have been nothing wrong with that. But we started evolving, or changing.”

Work began in earnest during last year’s Coachella festival in California: “We rented a house in San Bernardino Valley National Park. The week in between the two weekends, we really started to hash things out. Then we rented out a very hot warehouse in Birmingham where we could write. And me and Jesse and a few of us would send stuff back and forth via Dropbox. That gave me the ability to work on harmonies on the vocals. I wanted to take it up a notch, in all realms.”

Looking to such inspirations as Tom Waits and Nick Cave, Janeway was intent on lifting his game as a songwriter on material for the second album. “I’m married to a woman with a masters in literature, and I can’t show her lyrics unless I’m pretty proud of ‘em,” he says. “I had to sit and think about what I’m saying – what do I want to say, is there anything to say? What’s my perspective as this Southern kid who’s watching the modern world and feeling very much like an alien in a lot of ways. This is more personal. If you’re going to say something, say something, and don’t waste your breath unless you feel like you’re saying something.”

Janeway adds that his reading of the book Just Mercy by Bryan Stevenson, founder of the Equal Justice Initiative, played a role in the direction of the work: “I didn’t want it to be an overly political record, but I feel it shows up a little bit on the album.”

With a full complement of new songs in hand, St. Paul and the Broken Bones entered the studio with Butler, leader of the British band the Bees and producer of Devendra Banhart and Michael Kiwanuka.

“Jesse was listening to one of his records and he said, ‘Everything sounds great,’” Janeway recalls. “It sounded like a real record – everything had depth, and was expansive-sounding. Butler ended up being the guy that we wanted to use. Producer- wise, I think we knocked a home run. He is very meticulous.”

On Sea of Noise, the band’s brawny horn-driven sound is augmented – and displaced — by the use of a string quartet and a vocal choir. The strings – recorded at Memphis’ historic Sam Phillips Recording by engineer Jeff Powell – were arranged by Lester Snell, a veteran of Stax Records sessions by Isaac Hayes, Shirley Brown, Albert King, and the Staple Singers, among many others. Janeway says of Snell, “He did all these classic, great records in Memphis – he did the string arrangements on them. The strings, for us, supply a darker tone. Horns sometimes can’t portray a certain darkness. We thought that would be the best option, instead of horn lines. We have songs on this record that don’t have any horns at all.”

Employed on “Crumbling Light Posts,” the recurring motif that appears three times on the album, Jason Clark and the Tennessee Mass Choir were recorded in another legendary Memphis facility. “The Stax Museum let us go in there after hours and record the choir,” Janeway says, adding with a laugh. “We said, ‘Well, hell, we’re in Memphis, let’s just see if they’ll do it.’ It was pretty neat, I’m not gonna lie.”

He says of the finished work, “Sea of Noise is not quite a full-blown concept record. It is focused in terms of subject matter – finding redemption and salvation and hope. ‘Crumbling Light Posts’ comes from an old Winston Churchill quote, in which he said England was a crumbling lighthouse in a sea of darkness. I always thought that was a really interesting concept – that we’re falling anyway. In this day and age, it is the noise that has defined so many things. We’re going to fall to it eventually, but for now we feel like our heads are above water. It felt anthemic.”

The album’s lyrical and emotional richness is heard loudly in stunning new compositions like “Burning Rome” (which Janeway describes as “a letter to God, if I could write it”) and the startling “I’ll Be Your Woman,” which knocks traditional soul music gender roles on their heads. Janeway says of the latter song, “I wrote that with Jesse, and he said, ‘If I can write that song, I can die a happy man, because I’ve finally made something that I feel can stand up to my standards.’”

St. Paul and the Broken Bones, which toured extensively in the U.S. and Europe behind their debut album, will put their take-no-prisoners live show on the road this fall. Their most recent concert work included arena dates opening for the Rolling Stones in Atlanta and Buffalo. Some acts may have been daunted by such a task, but not this one.

“It was pretty neat, it was pretty crazy,” Janeway says. “I love the Rolling Stones, but my train of thought it, you gotta try and blow ‘em off the stage. And that’s still my goal.”