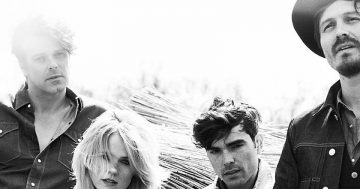 Great songs. Sparkling guitar riffs. Acoustic string instruments. Intricate vocal harmonies. The sheer fun of playing together. All these, and many more aspects, vie for your attention when listening to The Common Linnets’ latest release ‘II’. But the overriding impression is one of a band in complete unison. They are musicians who have discovered the power of togetherness and have created a sound that rings so true, you could be forgiven for thinking the group members have been working together for years.

The Common Linnets have made immense progress. This release is all killer, no filler, right from the opening track the no-holds-barred rock song ‘We Don’t Make The Wind Blow’, to the magnificent closing track ‘Proud’. Quality is the key, evidenced by tracks such as the spooky ‘Runaway Man’, the Crowded House inspired ‘That Part’, and the stately moving ‘Soho Waltz’. Did Ilse DeLange ever hit that high and lonesome sound so well as she does on ‘Days Of Endless Time’ supported by dobro and mandolin? But ‘II’ also offers ‘Hearts On Fire’, an irresistible up-tempo dance tune, and the steel strings of ballad ‘Dust Of Oklahoma’ plucking at heartstrings.

The vocal harmonies reflect the influence of 1970’s West Coast groups such as Fleetwood Mac, Crosby, Stills and Nash & Young but ‘II’ is clearly in the Americana and alt-country vein. Small wonder, considering that the tracks were recorded in Nashville, Tennessee, with guest contributions from dobro player Jerry Douglas and pedal steel specialist Paul Franklin, two of the biggest names in the genre. In the words of co-producer JB Meijers: “These guys are some of the finest musicians on the planet. I deeply admire people like Jerry. He is completely relaxed in the studio and I wasn’t even that aware of him. But when at night at playback time I listened to the stuff we did during the day I thought: holy shit, we’ve got a genius like him on the team!” Yet, the band created a timeless and unique signature sound. JB: “Of course, the roots of the music are American, simply because we all love that tradition. But we are not purists. We do employ chord changes and melodies that are truly European and that gives the music a subtle twist”.

That is how it should be. After all, The Common Linnets are a transcontinental band and the American singers and songwriters Matthew Crosby and Jake Etheridge often spend weeks on end in Europe. Early this year all four members of the band went to Berlin to work on material that became the backbone of ‘II’.

Throughout a tumultuous year other songs were written in dressing rooms, on tour buses and in studios. The tour that started last fall – ‘soul winning’ as Ilse calls it – took them to various continents and was a huge success. All kinds of gold, platinum and other awards were bestowed on the band. There was the European EBBA-Award (presented by Jools Holland, who immediately invited the group to play on his BBC Radio show), The German Regenbogen Award and equally prestigious Echo Award, plus a slew of other international awards. Only two years ago The Common Linnets were just an idea of Ilse’s, who wanted to work in the relative anonymity of a band and to record an album with like-minded musicians. This became Low Profile.

The result was anything but low profile and taking part in the Eurovision Song Contest put them straight in the spotlight. ‘Calm After The Storm’ won an astounding second place and became a number one hit in fourteen European countries! The eyes of the world were upon them and everybody wanted to see them perform. But who are The Common Linnets? Most people got to know them as a duo.

On the eve of their European tour they decided on the group approach. Tricky: from a duo to a full group and from the brightly lit Song Contest stage to murky rock venues. They were guided by a single motto: let’s go with the flow and see how far we get. Looking back Ilse says: “The Song Contest was fantastic and we gained a vast audience. We were the odd one out with a beautiful little song that got us to second place. But you can’t expect that momentum to last and we had to start creating our own music.” To which JB adds: “The Song Contest has its own drawbacks. We had to prove that we could really play and put on a complete show. I think we succeeded. On stage we quickly became a tight-knit unit.”

Of course, the gradual success was more than welcome. But the feel good factor was more important. In their ‘cocoon’ of constant touring, composing and recording the group grew very close. “Suddenly we were on this unforeseen and completely unknown adventure trip,” Ilse says. “The start of international recognition and the possibility of bigger things is all new and exciting to us. You can try to tell your friends and relatives how it feels, but we are in the midst of it and that has really brought us together.”

New songs seemed to come spontaneously and we were given the chance to mature on stage. The vocal harmonies grew ever tighter. The group spirit is evident by the absence of real solo tracks on ‘II’. Jake states: “We often work on a song together. And once our vocal parts start blending to a point where we’re all singing with big smiles on our faces we know that we’ve got a damn good song. That’s how we operate.”

Ilse concurs: “Our music grows organically and that is very important to me. We did not start out to score hits and get platinum records. It is all about our love for music and creating something that comes from the heart. I wanted to be free of all the expectations I have to deal with as a solo artist and be part of a band. Our new record has really improved on that score, so we’re heading in the right direction.” And the ego of a singer grown accustomed to being in the spotlight on stage? “Oh, that’s doing fine,” she smiles, “but thanks all the same.”

A fantastic new record. A fully booked agenda for well into the next year. The future looks bright for The Common Linnets. Ilse: “The main thing is the fun we are all having and that is something we want to hang on to. Whatever happens, we are in this together so things could not be better.”