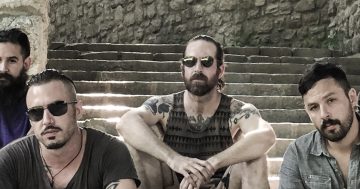 THE DILLINGER ESCAPE PLAN has been a juggernaut since their inception in 1997.  With their appeal to music lovers of many varieties and tastes, their unparalleled live performances, their awards and accolades and their ultra-loyal legion of fans, they have made an indelible mark on the world of rock music.

The band has put out five studio albums, four EPs that included a #1 on Billboard Heatseekers chart and a #4 on Billboard Indie charts. They have been winners of The Golden Gods’ Best Underground Band, Kerrang!’s Inspiration Award and Relentless Award as well as a VH1 Most Influential Guitarist award. Their most recent configuration includes original member, guitarist and label-head Ben Weinman; long time lead vocalist Greg Puciato; long time bassist Liam Wilson; drummer Billy Rymer and brand new guitarist, Kevin Antreassian.  Antreassian entered the fold when James Love exited.  He had been a guitar student of Weinman’s and his fate was put in Rymer’s hands “I told him he would have to try out like everyone else and Billy was going to be the judge. Not me. I figured I put Billy through so much hell when he was trying out that he would run Kevin through the ringer. The rest is history.”

Their sound is unlike that of any other band, but that has been the inspiration for many that have followed. The New York Times described it best when they said, “If you really want to know these songs — metal through the jazz-rock filter of Allan Holdsworth and Mahavishnu Orchestra — you have to listen repeatedly and concentrate. Increasingly it’s a composer’s music…a haywire, acrobatic combustion that occurs in almost every song.”

THE DILLINGER ESCAPE PLAN have announced their sixth Full-Length album, DISSOCIATION, is likely to be their last and is due out on October 14, 2016 on their PARTY SMASHER INC label.  This is as good a cause for introspection as any…

If this is, in fact, the end, an appropriate epitaph is in order.  Puciato would want the world to know “That we were free and did what we wanted with pretty much zero regard for rules or expectations or our own past or future. The balance of fucks in our account has never once been above zero.”  Weinman adds “There is no epitaph for art. Great art will live forever long after the creators have left the earth. I can only hope that somewhere 1000 years from now a Dillinger song is heard somewhere in space.”

“For the first time writing this record didn’t calm me – it made me anxious,” says Weinman.  “Writing Dillinger records used to calm me, it used to actually focus me.  It was like meditation – my crazy brain that is always going a million miles an hour would actually focus.  This time it was creating anxiety that I felt physically.  So I was really scared that I might not be able to produce.  Listening back to these songs I got feedback from people saying they are crazier and more schizophrenic than anything we have done since Calculating Infinity. Greg was almost like ‘I don’t know how I can sing on this.’”

Puciato explains the band’s writing process as the resolution of a complex puzzle.  “Ben (Weinman) dumps a box of puzzle pieces in front of me, pieces that could be formed together in a lot of different ways, and then doesn’t tell me what the puzzle is supposed to look like, and then my job is to put those pieces together and make a picture that means something to me,” he explains.  Weinman provides a foundation upon which Puciato builds.  As is the band’s trademark – not everything always  ‘matches up’ – that has become part of the beauty of their work.  “What you end up with is different than what either of you would have planned,” explains Puciato. “That to me is as exciting as deliberate cohesiveness. They both have their joys. If you say “oh let’s make a part that sounds or feels like this”, and then you nail that, that’s a great feeling. But the parts that one person meant to be one way, and the other kinda envisioned going another way, the middle ground you create, those are where you grow.”

A Dillinger record is never easily made.  “The moments of bliss are when Billy & I get a full demo and listen back.  The process is always so difficult and stressful, but the payback is always worth it when we listen back,” says Weinman. “And then, when it gets passed off to Greg we hear a whole new side of it.  But the songs don’t really glue together until Liam puts his touch on them. His bass playing has become more a part of the band’s sound and personality with every record and I really feel that his work on this new album is by far his most ambitious to date.” Rymer adds “We really shed our skin with this one, both in the creative and recording process. There was a lot each of us were moving through in our personal lives that simultaneously affected the music as well as the time it took to make it. Now that it’s all said and done, I think we’re all happy with the results and relieved to never have to make this record again.”

“The work I did on the record was done before I made the decision to end things. I felt adamant that it was time to close the door for now. Lyrics were created after Greg and I had that conversation confirming it,” Weinman reveals.  Thereafter the album had more hands on it than any other THE DILLINGER ESCAPE PLAN record ever made.  “We tracked drums at a studio on Long Island called Vudu Studio. All guitars and Bass were recorded at Party Smasher Studio in NJ with producer, Steve Evetts. Half the vocals were recorded at Steve’s studio in Long Beach and the others with Producer Josh Wilbur at his home studio. Then of course additional guitars and sound design was done in my own personal studio dungeon,” jokes Weinman. “The album was then mixed by Kurt Ballou at Godcity in Boston.”

Of the new material, Wilson says “We’re selling you the gas and seconds later siphoning it back out of your tank when you aren’t looking.  This is the record that’s gonna drop a big nuke on all the posers.“  The range that songs like “Symptom of Terminal Illness,” “Low Feels Blvd” and  „Honeysuckle“ traverse challenged the band’s ideas about even having a creative ceiling, and what was possible without losing their authenticity.   “We really achieved some bewildering balances on all these songs,” Wilson adds. “These tracks represent us at our most scathing, most unhinged, most indestructible and simultaneously at our most focused and delicate; our most detached and yet most intimate…Most unexpected and still familiar, Most memorable and still defiantly experimental. We’ve always been a bit of everything and its opposite, and it’s only more fully realized on Dissociation.”

The end is nigh. Should make for some incredibly interesting listening!